I have no idea where I've been (well, I do, taking care of a little monster named Peter, and trying to Open Source Traffic Server), but I digress. I've finally found it, and it is absolutely hysterical: The Guild! The music trailer for season 3 is pretty cool too, definitely worth watching. So, better late than never, I've turned back to the Nerd Side again, and enjoying this show immensly.

I recently helped a friend setting up his new E-commerce site (http://www.weinerwraps.com/) using Drupal. We were considering a few modules, and finally decided on using UberCart. Now, our site isn't flashy, or have fancy graphics, but getting it functional was really easy. What we currently have working is

We've had a few issues on the way, most notably (and very confusing) was that the shipping cost calculator stops working if you disable the country field from the user entry for the shipping address. This made absolutely no sense to me (since we only ship to the US), and there were no errors or indicators whatsoever. Clearly someone didn't think through a typical use case scenario here ... Other open issues include

All in all, setting up an E-commerce site with Drupal and UberCart has been a pretty good experience.

I had this nice long post about this problem, but hit the wrong key and accidentally opened up my bookmarks, and lost the entire post, so here's the short story:

If you're having problems (like I was) getting decent prints from Lightroom 2 to an Epson R1800, try this: download the European Epson driver. I saw that solution posted on the Adobe forums, and I couldn't believe it worked, but it did!

I installed Firefox 3.5 the other day, and was immediately dismayed to see that whenever I looked at my photos on Flickr, they were red. At first I thought it was my monitor becoming miscalibrated, but then when I viewed everything in Lightroom, it was fine. Leif suggested I try other browsers, so I tried both Camino and Safari, and everything looked fine, which is when we determined it was a Firefox problem.

It's been long in the making, Chuck and I have worked hard to get this through all the hurdles and red-tape. But finally, we have submitted this draft to the Apache Incubator:

We'll be making an official "announcement" soon on the Y! Developer Network, but this is pretty exciting for us.

My Dell Mini-9 just came back from Dell service, and it's now a totally different experience. They replaced the motherboard, and possibly the CPU (I can't tell). With these changes, the box is performing just as expected, even when it gets warm. If you own a Dell Mini-9, I'd suggest you download Geekbench and run it at least 4-5 times. With the Ubuntu OS, it should score over 1,000 consistently, and with MacOSX it should score around 900.

The issue seems to be that with the bad mobo (or CPU), the CPU will throttle way too soon, and too much. The CPU is no where near the temperature levels where it'll throttle to save itself, yet it does throttle, severely. Before my repairs, I could get as low scores as 200 (i.e. less than 25% of expected performance). To me, this became painfully obvious when running anything CPU intensive, like watching a very high resolution movie, or compiling something.

Dell were way cool about bringing my unit back for service, and it took about a week from when I sent it until it arrived back home again. I'm very impressed with that.

My new Dell Mini-9 just arrived, I quickly unwrapped it and booted it up. Obviously I picked the Ubuntu version (8.04 unfortunately), and I upgraded the memory to a full 1GB (the default configuration is only 512MB). System booted up pretty fast, and brings you through a quick setup "wizard". No problem so far, other than that the keyboard is really tiny for an adult male to type on. And various important characters are "hidden" on the keyboard, and the layout really isn't what I'm used to. But hopefully that'll get better with time. After all, I got this for it's tiny size.

After booting it up, I quickly enabled Wireless WiFi, and this mostly worked well. I had to change the wifi to use WPA Personal 2, and for some reason it wouldn't "remember" this. It took a few times via the Network administration UI to get it to keep this setting. I haven't played with the wifi outside of my home network yet, but hopefully it'll be equally easy to setup different profiles for other WiFi hotspots.

I also went through the Synaptic package manager quickly, uninstalled a few completely uninteresting packages (cleared up several hundred MBs getting rid of Chinese fonts, and Japanese input tools etc.), and I had to install a few missing important packages. In particular, the Mini-9 did not come with Emacs, wtf! There's plenty of space left on the SSD, well over 4GB is left. But of course, I've already ordered a 16MB SDHC card from Amazon, which should arrive on monday.

All in all, I'm pretty pleased with this little gem. I bought it during one of the Dell sales, with Ubuntu and the 1GB RAM, it was around $260, which isn't a bad price at all. And the system is surprisingly snappy, and battery seems to last quite a while. Now, of course, I haven't tried to compile YTS on it yet :-).

Minime (i.e. the Dell Mini) had to go back to Dell, due to some issues. The suspicion is that the thermal sensor and/or the CPU thinks it's getting majorly overheated, so the CPU throttles itself. Many other people have reported this problem, and it shows up as major performance degradations (anything from 2x - 4x is possible). Since I got a second Mini-9 for Michelle, I quickly swapped her SSD with mine, and ran my installation (and benchmarks) on her HW (CPU + mobo) over and over again, and even though it gets hot, it never once dropped the performance (i.e. no throttling).

Dell is taking Minime back in for service, I really hope they can find something (because it's definitely broken, no question about that). If they don't, well, then clearly I can no longer recommend this HW. I would definitely benchmark my Mini-9, on the Geekbench benchmark I usually get over 900, I've seen as high as 940.

Just in case you are in shopping mood for an SSD drive, here's a must read article on AnandTech. The summary is, not all SSDs are good, or even usable. For sure, staying away from any SSD drive with the JMicron driver seems a given. I'm leaning myself towards the OCZ Vertex drive ($345 for the 120GB drive at Newegg).

Here are the top three things I wouldn't be able to be without, now that I have a little poopy machine in the house. Forget the cool toys that you really want, like the Flip Mino, or a new Dell Mini laptop. Sure, you'll need those too, but only after you've covered these three bases.

This little gem is the first thing you need to go buy. Trust me. The little monster will from the beginning make huge messes, in front, back, top and bottom of anything you put on him (or her). You can buy this pretty much anywhere, this is what I bought.

Forget that little rubber sucker bulb they give you at the hospital, you need a battery driven power sucker (the baby noses might be tiny, but they generate a good amount of goop). I got the Bébésounds Nasal Clear Battery Operated Nasal Aspirator, which has worked really well so far. Just clean it often, dried snott will clog it up. You can typically find it on Target or any other baby friendly store (be careful though, trips to these hell holes can get very expensive, specially if you bring the wife). 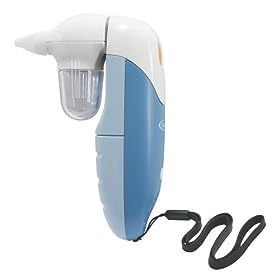 This is probably the best investment I made, it's pricey, but well worth it. The ear-poking thermometers don't work on these tiny creatures. Trying to keep a thermometer in the armpit, or the little butt, is just impossible. Instead I got a Thermofocus 5-in-1 thermometer at Wallgreens. Get it, it even lets you check that bath tub temperature before throwing in the little porker.

There you have it. I hope these three little nuggets will be useful to you as well.

Places to Get Ebooks

Amazon specific search - This search removes all the public domain books and sorts price from low to high.
Amazon Special Offers - All the Kindle special offers on Amazon